Profile of HAMADA, Takasi (same as Takashi, his first name. HAMADA is his family name.) 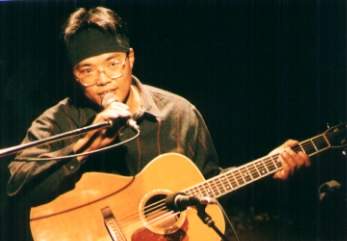 HAMADA was born in Otaru City, Hokkaido Island, Japan on December 11, 1964. He is all-time guitarist playing on the street, his own live concert, or playing at restaurant as BGM.

And until now, he has composed over 30 classic rag style tunes and several ragtime influenced tunes for guitar.  He loves modern ragtime too, such as David Thomas Roberts, Jack Rummel, Tom Shea, Tom McDermott etc.  In Japan, few people knows about them, and he hopes that they become more popular in Japan.

He is Japanese, but he is also an editor of "Ainu-Times", which is a quaterly newspaper writing in Ainu language.

His guitar style is quite unique. He can play in standard tuning, but more often plays in "Otarunay-Tuning" (EbAbCFCEb : 6 to 1). Using this tuning, he can always play the alternative bass, and can easily play ragtime in Ab key.

It fits to arrange piano rags for the guitar, and when he plays classic rags, it is always used. Also it is very helpful to avoid Russian sailor saying "please let me play your guitar!"

If you are interested, feel free to send him e-mail.